In search of local advice we stopped in a gas station/tackle shop/sandwich shop and found an older gentleman in his late sixties drinking coffee. He heard us asking the cashier fishing questions and chimed in, mentioning that he grew up in the area and could help point us in the right direction, for a free, he joked.

“Deal,” I said. “Hope in the truck. You show us where there’s some trout and we’ll hook you up.”

“You guys aren’t going to kidnap me? Are you?” he joked.

“No,” I said. “But, if you show us where we can catch holdovers instead of these fresh planters, I’ll give you a case of these.”

I opened the trunk and showed him a dozen cases of Pautzke Balls O Fire salmon eggs and FireBait.

“Where’d you get all these?” he asked me.

I told him I had a friend at the company. He didn’t need to hear anymore and hoped in the truck.

“Go that way,” he pointed. “I know where there’s a bunch of golden rainbows, but you guys probably won’t be able to get them to bite. They’ve been there a few weeks. Guys have been pitching everything at them for a week now. They don’t bite too well.”

He had us park a few hundred yards downriver of Harman’s and told us to walk through the field to the stream. We’d be able to see the golden rainbows and other fish, he mentioned. I drove him back to the gas station, set him up with a case of every one of our Pautzke salmon eggs, gave him my card (and told him I run the company) and drove back to the pullout.

We walked down to the stream, grabbed our camera equipment and pulled four golden rainbows out in 30 minutes. They weren’t large, but any means, but were clearly the fish he had pointed out. After snapping a few photos we released them for the next group of anglers to catch and moved downriver to target rainbows. After an hour we packed up and headed to the original destination. 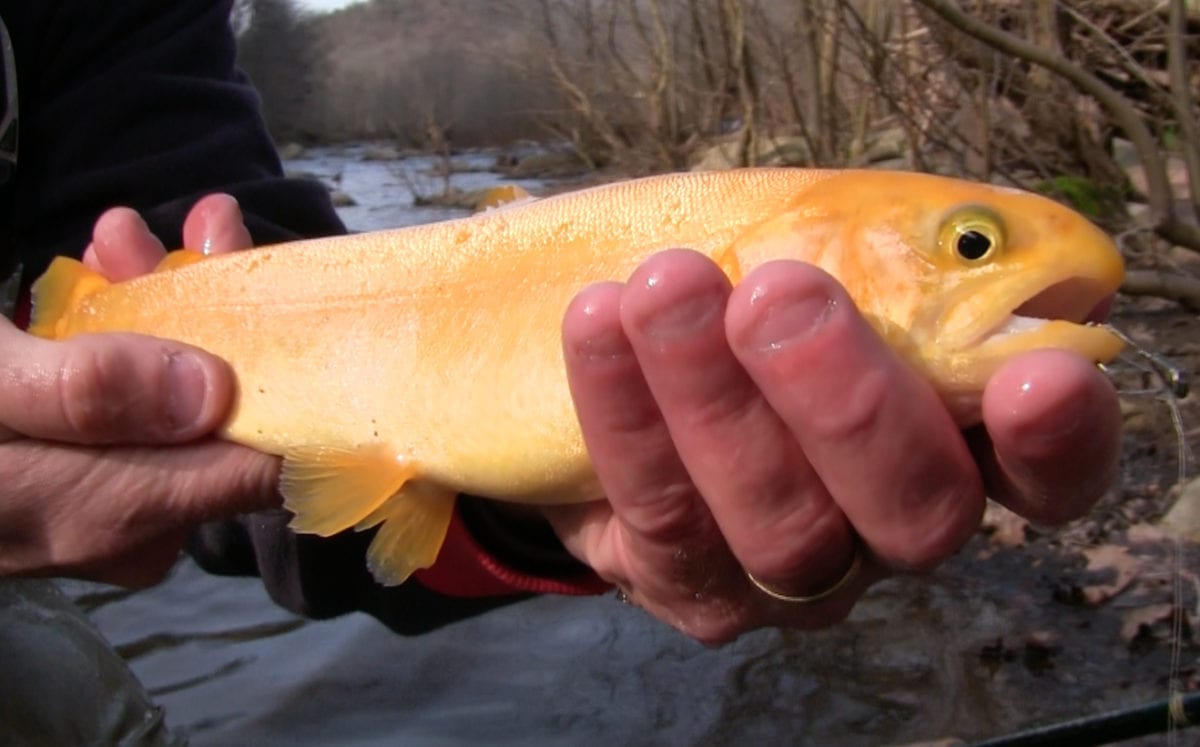 As with the day prior, the golden rainbows hammered Orange Deluxe, Yellow Jacket and Gold Label eggs. Not surprising, we caught and released more than a dozen goldens on the South Branch (all on film) later that afternoon, as well. The key was using four-pound test, running a green Trout Magnet float to keep the eggs in the strike zone and employing a single size 14 salmon egg hook with one to two of the above mentioned eggs. Once we caught a golden rainbow we switched to a different color egg and caught another.

Catching golden rainbows in West Virginia in the spring is a favorite pastime of many. The West Virginia Department of Natural Resources will continue to stock them through May and there will be no shortage on the North Fork of the South Branch of the Potomac. It’s no secret where they are. They stand out like a rainbow in the sky and with a pair of polarized glasses can be even easier to spot. Grab the above mentioned eggs and you’ll be able to catch them rather than merely see them.

Editor’s Note: Chris Shaffer is the Director of Operations for Pautzke and was wearing a West Virginia hoodie and beanie that day. Pautzke’s Orange Deluxe, Yellow Jacket and Gold Label salmon eggs are available at all West Virginia Walmart stores, Bass Pro and Cabelas.