Skip to content
NY Salmon River On the Scene

With one major product launch in the rear and another weeks away I called Pautzke pros Stephen Shen of STS Guide Service and Andy Bliss of Chasin Tail Adventures and asked them if we could float New York’s Salmon River and make a video using our new Trout Eggs and the soon to be released Fire Gel. Bliss is a gear junkie and couldn’t wait to get his hands on new product. Shen is more reserved and was happy to see if the steelhead in NY’s busiest steelhead system approved of the new offerings.

We’ve filmed on the Salmon River during the dead of winter almost annually for the last five years. Part of it is I’m a Syracuse fan and it allows me to catch a game in The Dome. The other part is common sense: it’s the most popular river in the region and even the biggest haters don’t complain about us fishing it. It’s no secret to anyone. After spending two days filming through the ice in Quebec we opted to drift the river on a Wednesday and only did a half-day float (so Shen and I could catch a basketball game at Colgate that night). We were surprised at how mild the weather was and how little snow was on the ground this winter. 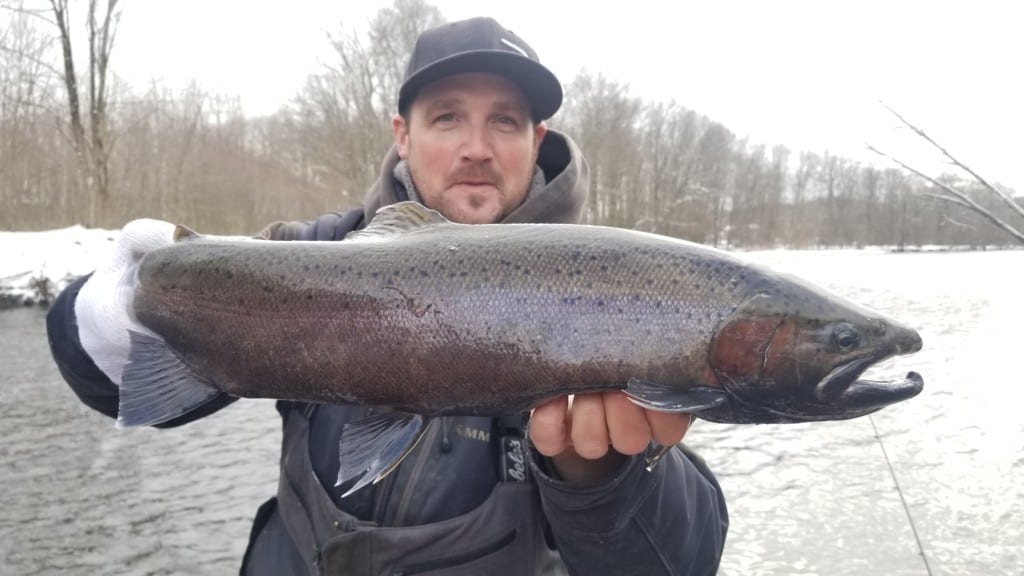 Fortunately, we only needed a half day float. Shen dropped us in at Altmar and we spent the first few hours of the morning sharing a large hole with six bank anglers and one other drift boat. The float followed a major winter rain event, but fortunately didn’t bump the river to extremely high levels like the Oswego was. Action wasn’t red hot, but we caught more than enough steelhead to film Pautzke Outdoors. 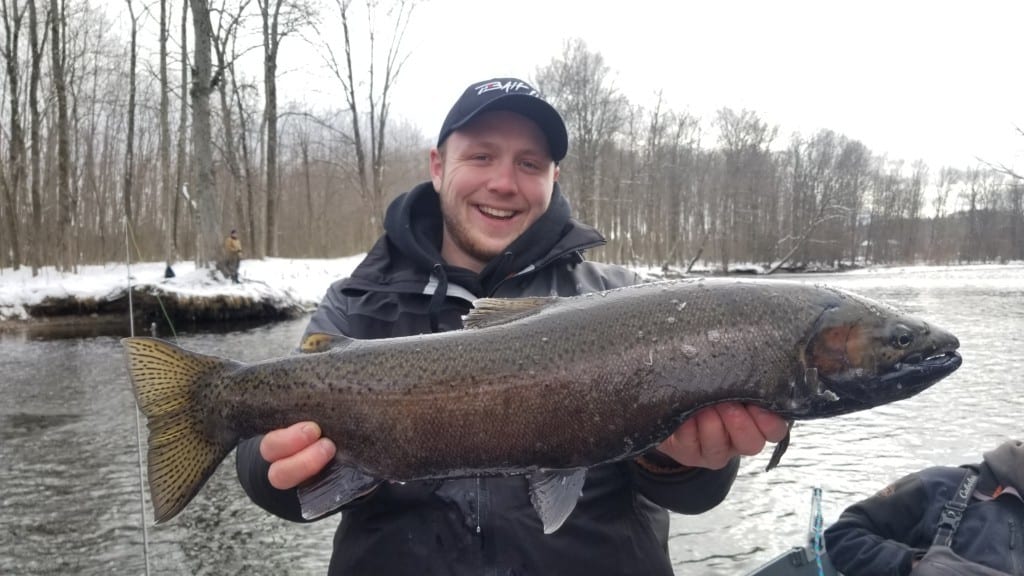 One of our pros Kyle McClelland from XXL Chrome Chasin in Michigan also joined us on the expedition. The goal was to mostly test the new Premium & Natural Trout Eggs, which Bliss had been catching steelhead on for weeks. Meanwhile, McClelland snuck in a few jigs regardless. Fortunately, those jigs got bit often, which we didn’t throw him off the boat for because he was actually testing out the new Steelhead and Anise Fire Gel. McClelland wasn’t a big scent guy prior to this fall. Now he doesn’t put a jig in the water without scent. Anise Fire Gel was by far his favorite and worked well, much better than unscented jigs. Bliss guarded the Steelhead Fire Gel. Shen wasn’t even able to get his hands on any. 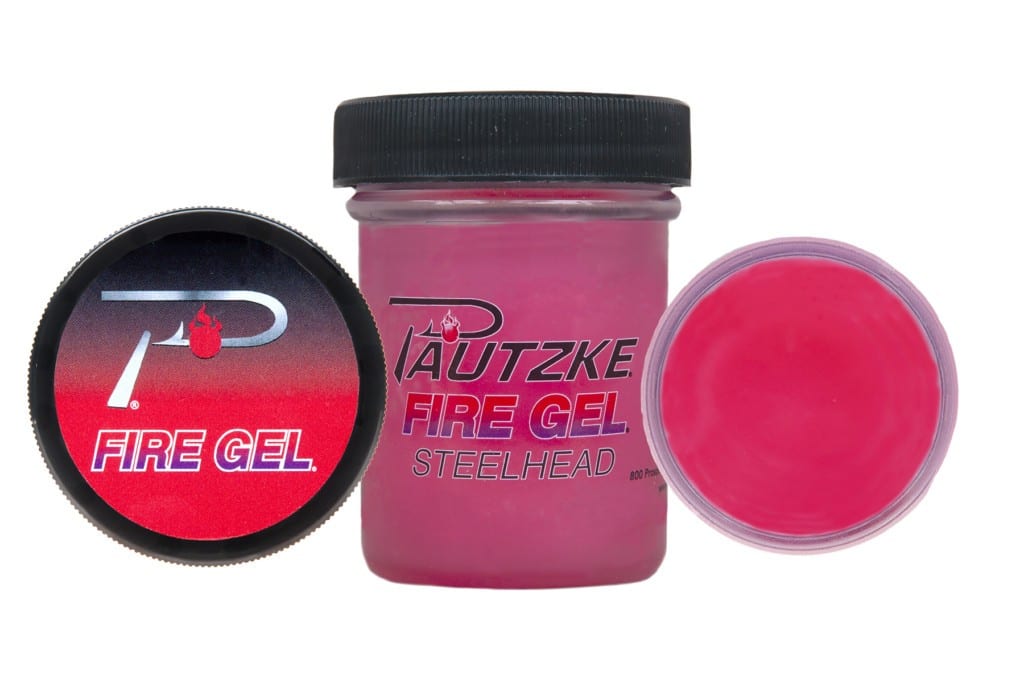 Meanwhile, the goal was to focus on Trout Eggs. We spent about half the day fishing them. The good news was a few guides, who aren’t affiliated with us, stopped to mention they were impressed by the Trout Eggs and caught plenty of fish on them. Shen arrived with Natural and Premium Trout Eggs tied in Atlas Mike’s 3-inch square spawn netting with Magic Thread. We caught half our fish on the Trout Eggs and the others on jigs coated in Fire Gel.

The boat that focused on the holes prior to us arriving caught several dark fish on plugs. However, we caught a mix of fresh fish and some that clearly have been in the river a while. They ranged from about seven to 10 pounds, which you’ll see on the next episode of Pautzke Outdoors due out in the next week. Both the jigs coated in Fire Gel and Trout Eggs proved to be successful, which didn’t surprise us. 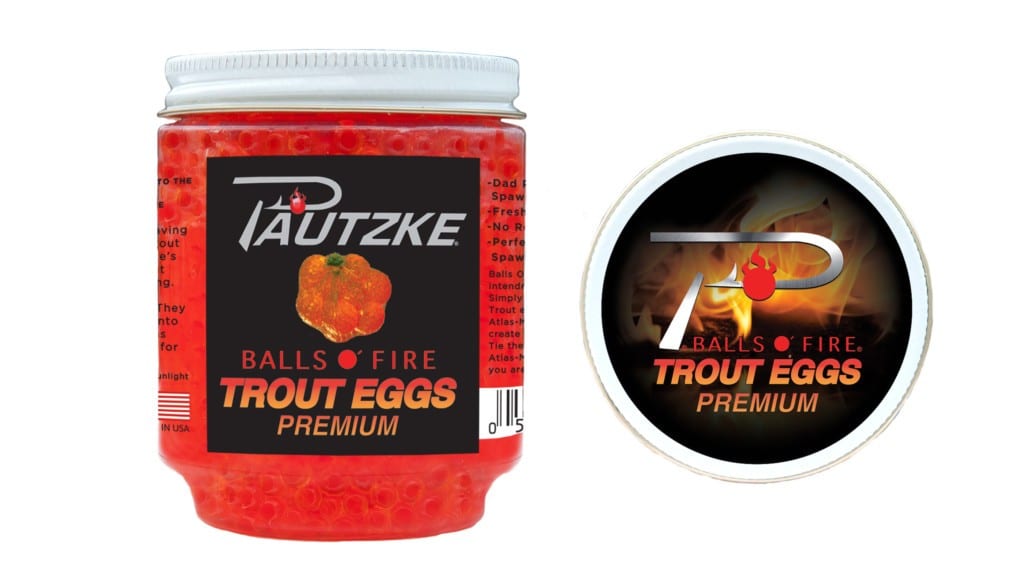 Special Note: The Trout Eggs are now available in store at Fat Nancy’s and All Seasons and online at FishUSA.com and Pautzke.com. Fire Gel is expected to be released February 15. More info on it will be revealed on Pautzke.com and our social media channels when applicable.