Ontario’s Ministry of Natural Resources stocks hundreds of lakes in Northern Ontario with brook trout, splake and rainbows. Brook trout are the most abundant. Meanwhile, fishing stocked brookies can be a hit or miss. No matter how good the lake or how large of a stocking it receives catching brooks is never a guarantee. Thankfully, while filming an episode of Pautzke Outdoors, we experienced exceptional fishing.

Northwest Ontario’s weather couldn’t have cooperated better for us last weekend. Mild temperatures and sunny skies dominated as we fished the small lake. In Ontario, anglers can run two lines per angler ice fishing. We setup one jigging line and one set line each and focused close to shore. On jigging lines, most ran a jigging spoon like a Hopkins (a favourite of stocked specs) or a jig fly like the MMJJ jig fly (a beautiful, locally made jig fly, also a brook trout slayer). We tipped the spoons and jigs with Pautzke Fire Dye worms and minnows. 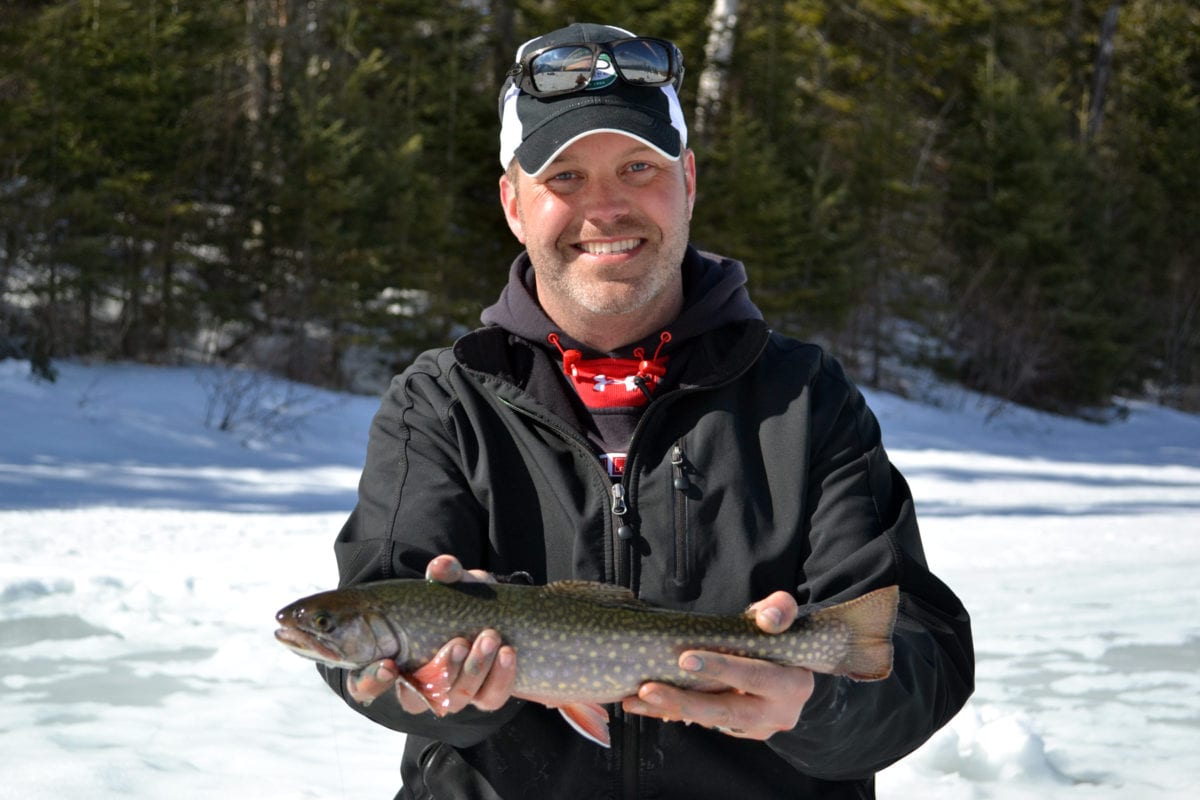 When it came to set lines we set them all up with a single hook and a small Chartreuse Fire Dye live minnow. This was my first time fishing these for brook trout. They looked cool and glowed beneath the ice. The brook trout appeared to share this sentiment. 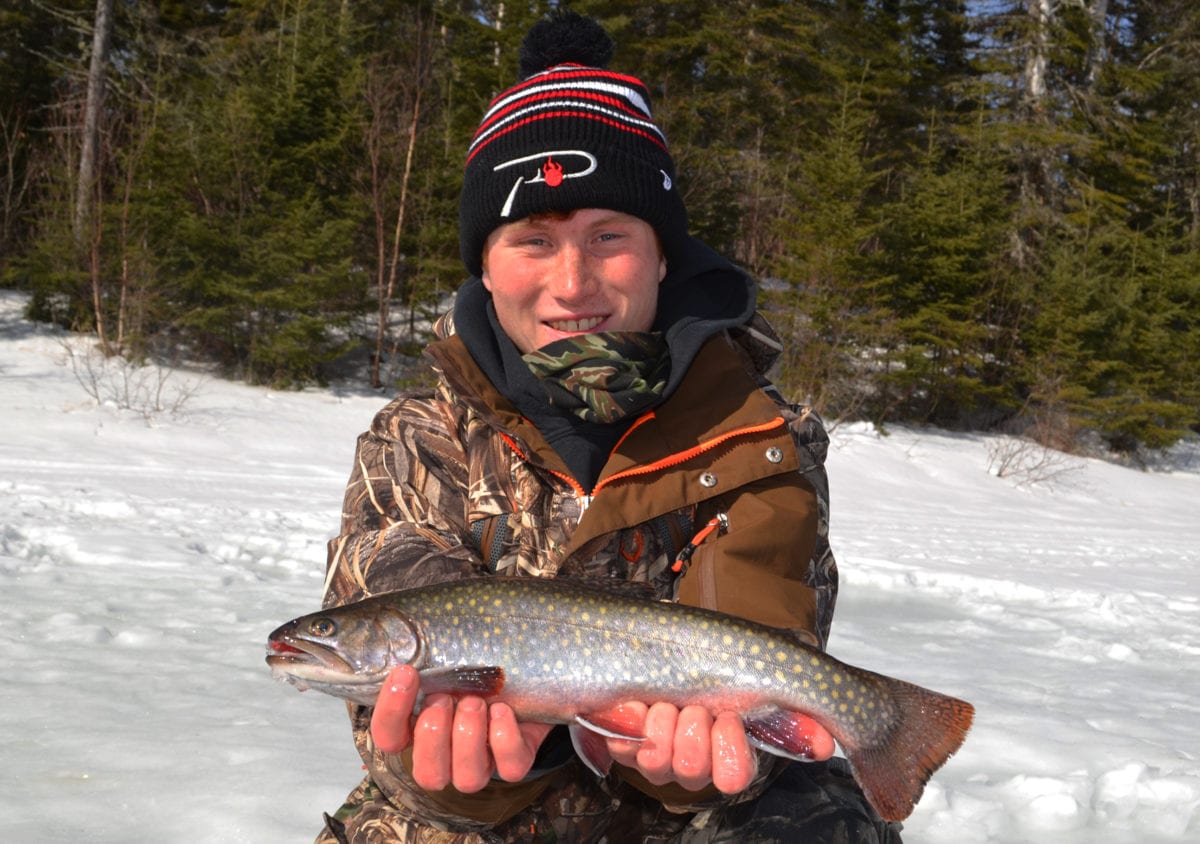 Fishing started off slow. The first two hours we had landed a couple fish and missed or lost double that. Action exploded later in the day. I’ve spent a lot of time on brook trout lakes, and as much as I love it, I’ve been skunked as many times as I’ve caught fish. This was the most action I have ever seen fishing stocked trout. 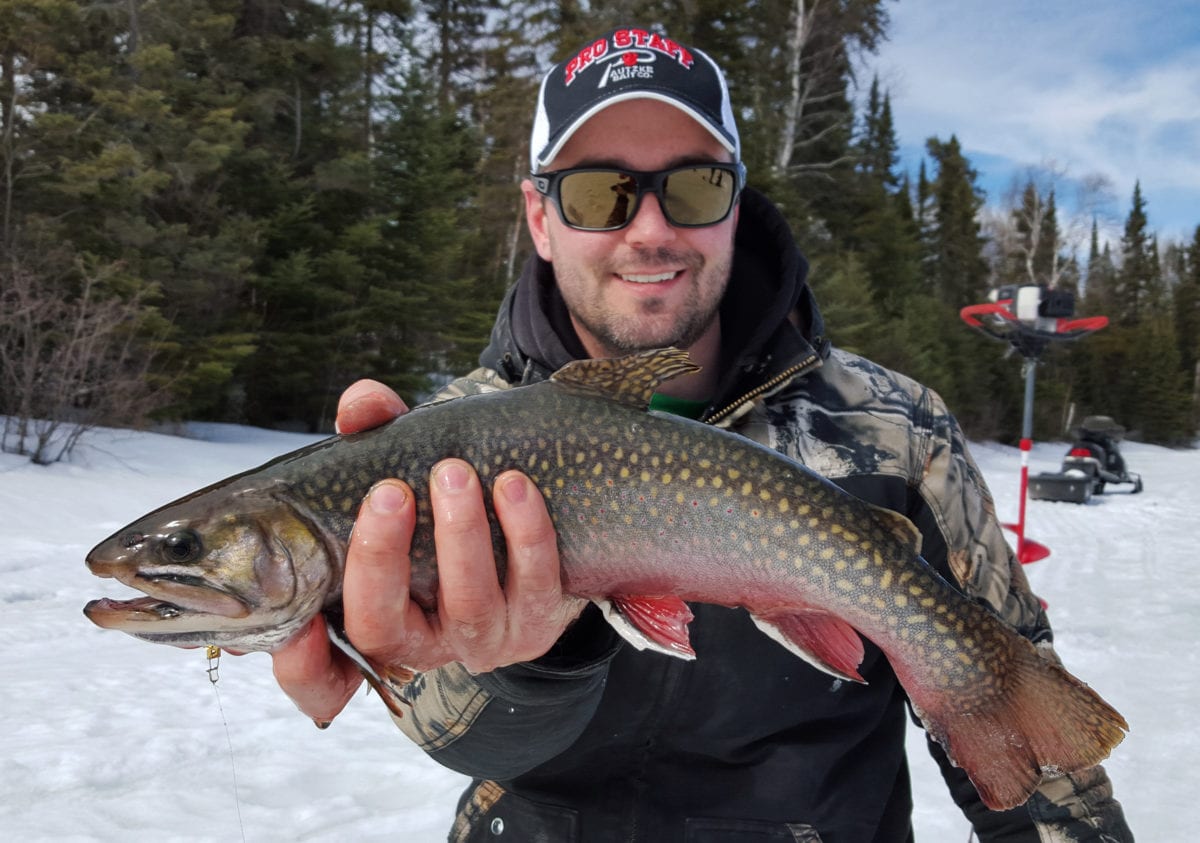 Targeting roughly four-to-six feet of water the trout were snapping live dyed minnows and dyed worms quicker than we could capture them on camera. I’m betting we caught 30-40 brookies. The majority of these stocked fish were released. But, we kept a few for the frying pan.

I’ve been using dyed and brined dead baits for some time, but having the ability to use a live chartreuse minnow or orange and blue worm is something else! Making the worms was painfully simple. 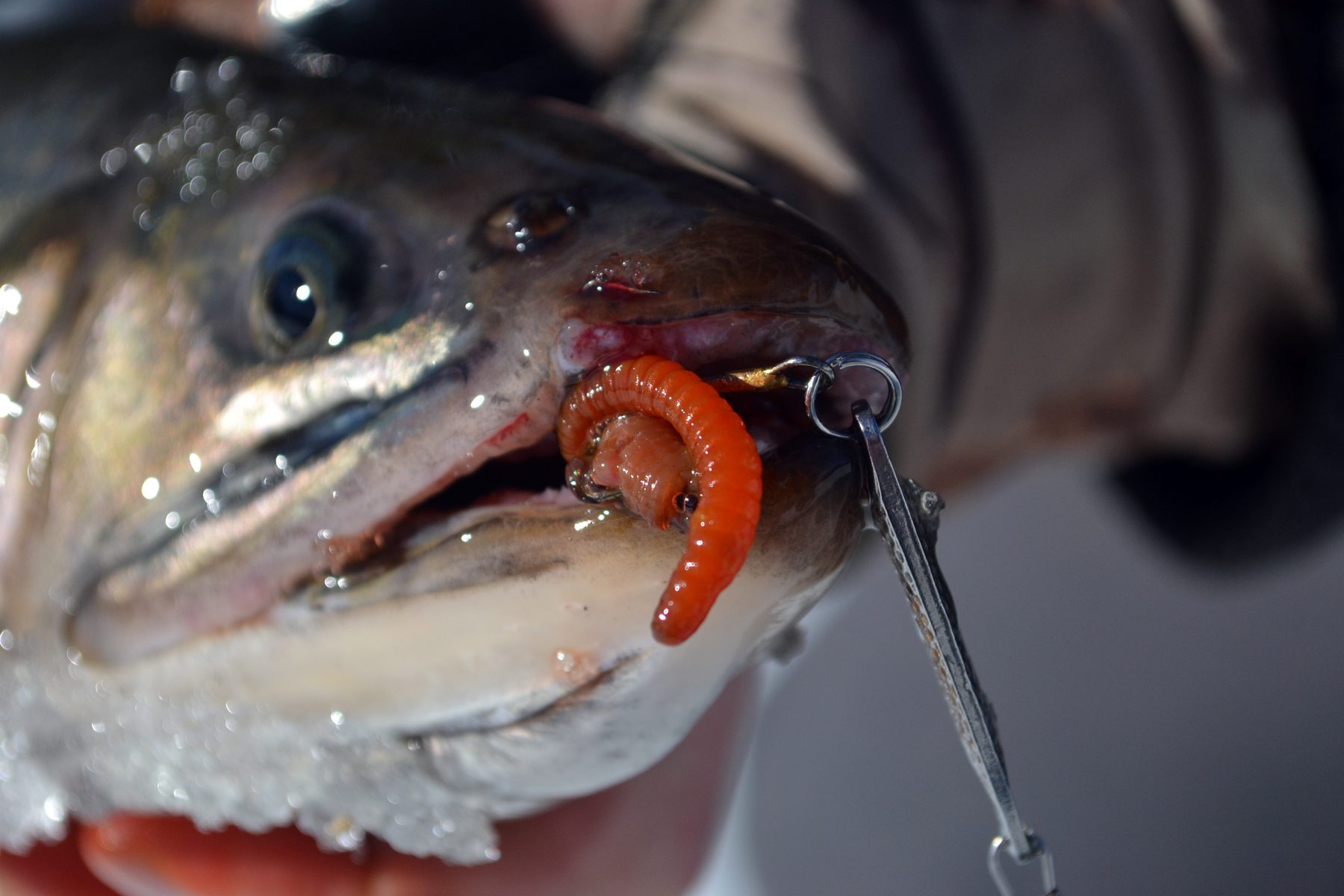 I emptied the dirt from the worm container and added a small amount of Fire Dye, just enough to coat the bottom and not drown the worms. Within minutes the worms took the colour. Meanwhile, I found after leaving them in the dye for an hour or two they held the colour better. 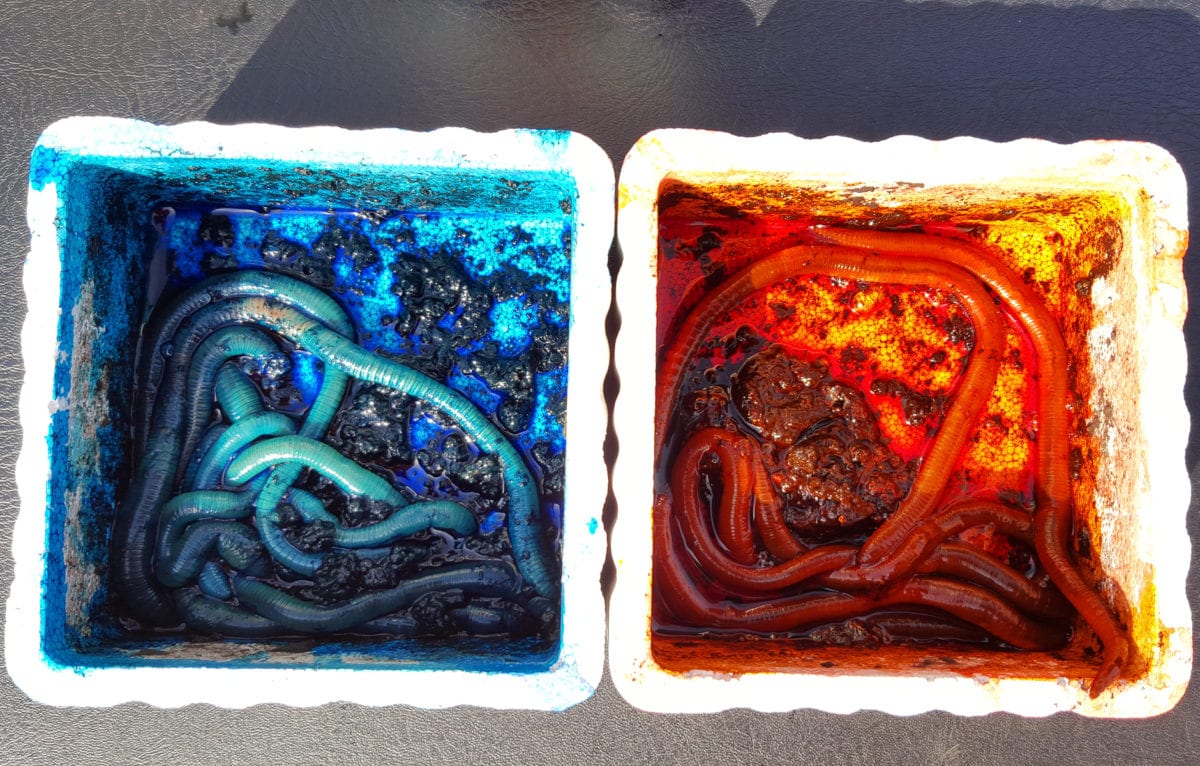 I added the minnows to a clear bag (a small clear Tupperware is best) with a small amount of water. You want the minnows to be packed in. Then add about 1/3 of a bottle of Fire Dye and let them sit. To keep your bait healthy, especially with the minimal amount of water, you’ll want to keep them aerated. If you use too much water the dye will be diluted and not take to the bait. Monitor the minnows. If they become too sluggish add more water. After 2-3 hours, check your minnows and see if they’ve taken the colour. I heard that minnows, like shiners, take the dye wonderfully, whereas the fatheads and dace sold locally seemed to take a bit longer to take on colour. The dying minnow idea is fairly new to me, so expect some more specifics in another Fire Blog down the road. 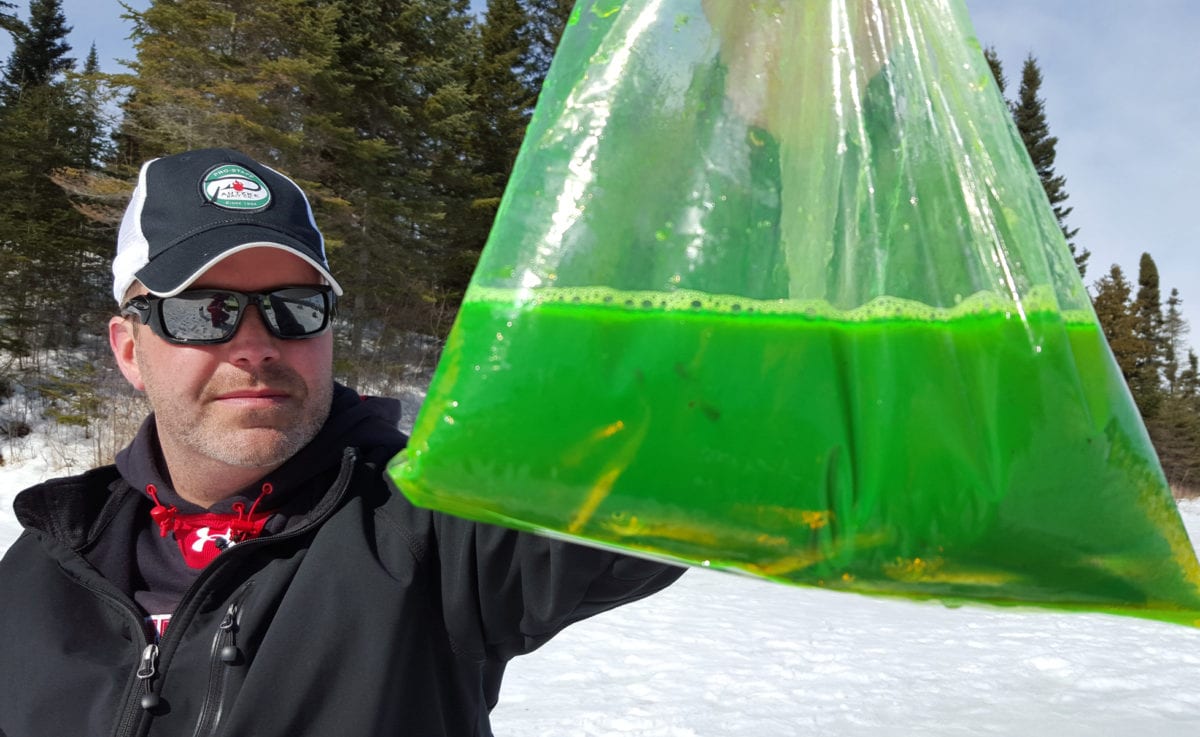