A north wind kept the GTA’s shoreline relatively calm over the weekend. However, soupy and choppy conditions on Lake Ontario remained a few miles offshore keeping smaller boats pinned to the shoreline. Fortunately, a number of staging Chinook were available along the skyline from Toronto to Oakville.

We were in town to film Pautzke Outdoors out of a small private boat and were forced to troll far closer to the bank than we hoped to. Meanwhile, the plan was to target Chinook ourselves, rather than team up with a guide that had been following the fish daily. We called in outdoor writer Josh Choronzey to drive down from Owen Sound (with his buddy Dan Gavel and his boat) to put us on fish. Choronzey has only fish the big lake once this year, but grew up fishing it with his father Darryl a well-known Canadian TV fishing personality. 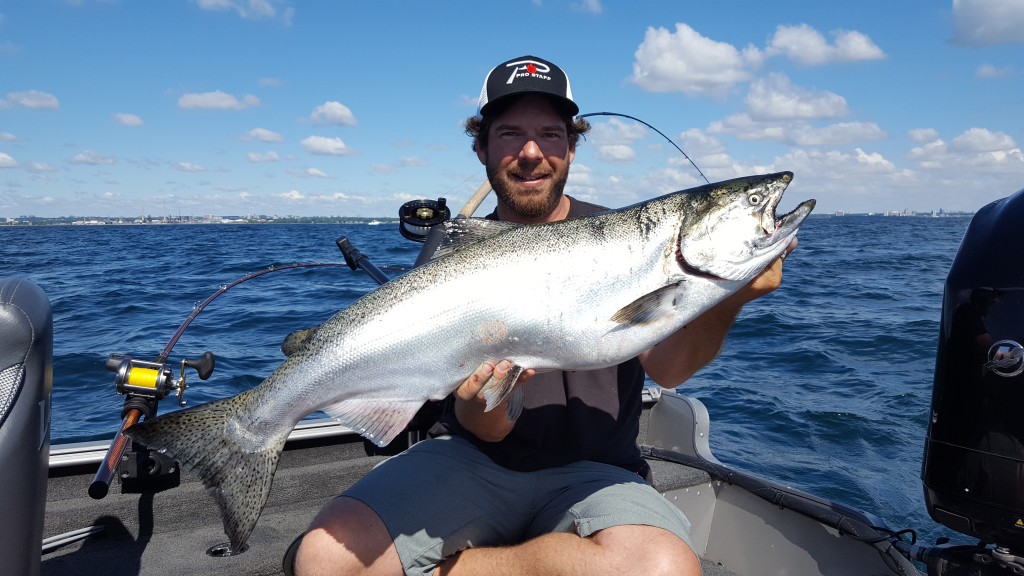 Fortunately, good bait brought success even in poor conditions. We planned to start at first light, but held off until about 8am hoping for the wind to subside. The forecast called for light winds. Meanwhile, stronger gusts prevailed. Can you believe the weatherman was wrong? We launched in Port Credit, motored to 100 feet and dropped lines. We fished four lines: two off downriggers and the others with Dipsy Divers. 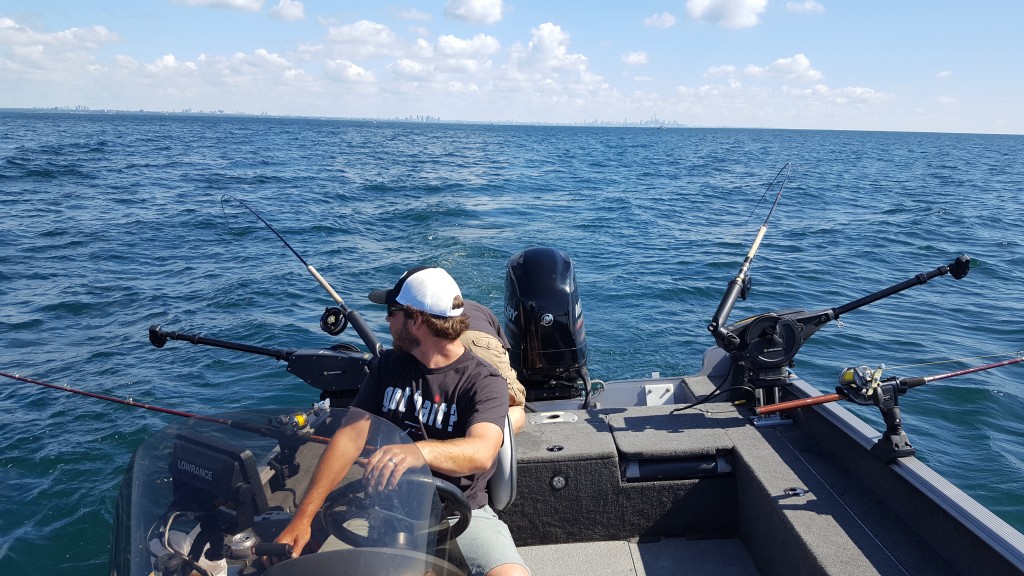 Action was hit and miss. Trolling from the edge of downtown Toronto on back to Oakville, some stretches had better concentrations of salmon than others. Considering the section of lake we wanted to fish was unattainable with our smaller boat our day turned out exceptional. We caught a few large Chinook while missing several others. They weren’t our target audience, but we also caught a half dozen one-to-three-pound salmon, which we released without removing from the water. 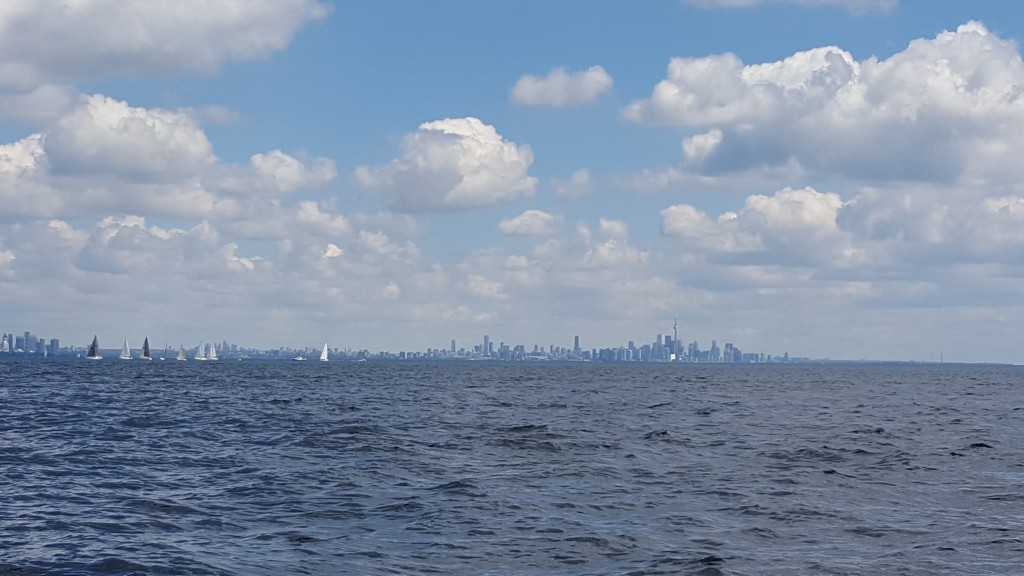 We spent the warmer hours of the day focused on trolling in 100-150 feet of water and from 50 to 90 feet down. Not surprising, our bites came from that wide range rather than a specific depth. Of the adult salmon we caught all were in line with the large Chinook that are showing this summer. We caught some in the low and others in the mid twenties. These were short of the huge Chinook caught up to 35 pounds this summer, but much better than previous years.

All our action came on Fire Brine anchovies, which I’m told are tough to find in the GTA right now and selling for a premium in Owen Sound where ours came from. Herring are more available and work well, too. However, Choronzey wanted to run anchovies, which worked great. We dropped the ‘chovies into Chartreuse and Blue Fire Brine at midnight and squirted Blue and Chartreuse Fire Dye in with it to make them more vibrant with the short turnaround we had before fishing. Fortunately, the baits turned out great and fished well a few hours later. 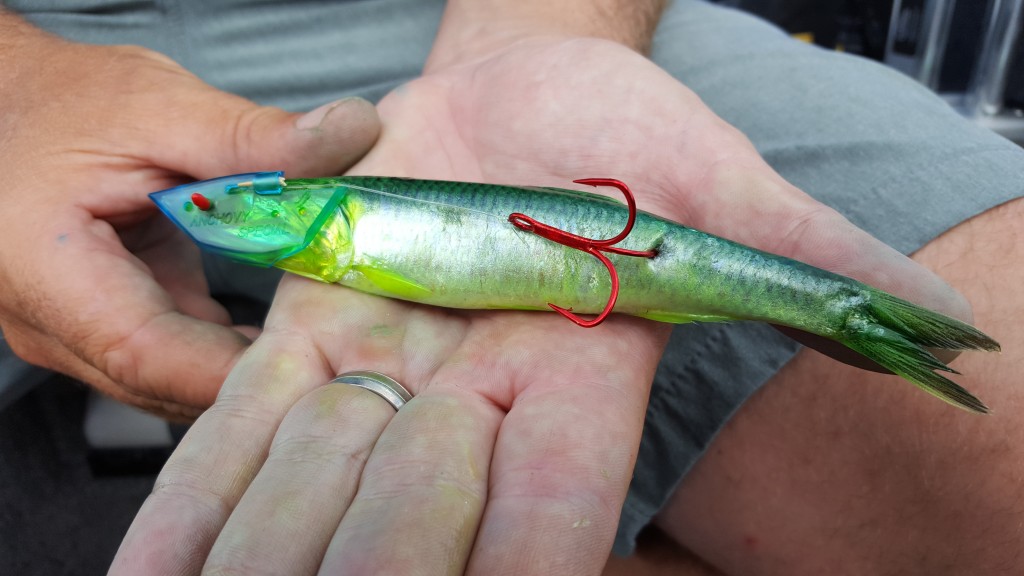 Anglers can expect action to improve daily in front of tributaries as salmon stage to spawn. The remainder of August is expected to provide quality fishing and it’s no secret the largest fish will come on bait. Many believe the 40-pound mark will be broken soon. With brined bait you might get it.