A decade ago winter trout fishing in the greater Nashville area was unheard of. Cold river, creek and lake temperatures kept the bass bite in check and many anglers at home. Fortunately, a Tennessee Wildlife Resources Agency sponsored program to stock droves of trout mainly in the Nashville and Memphis area has changed that.

With more than a dozen popular sites in the city of Nashville, and in the suburbs, local residents keep their eyes pinned on the stocking report, anxiously awaiting monthly trout stockings and arriving fully gear up to catch limits of rainbows. We experienced this first hand at several Nashville area rivers, creeks and ponds.

On Friday, we drove from Nashville to Lewisburg to chase a fresh load of trout that was stocked at Big Rock Greenway, which can be confusing to even locals, who have never heard of The Greenway, a small creekside park in town limits along Big Rock Creek that receives heavy pressure from locals and out of towners during stocking season. 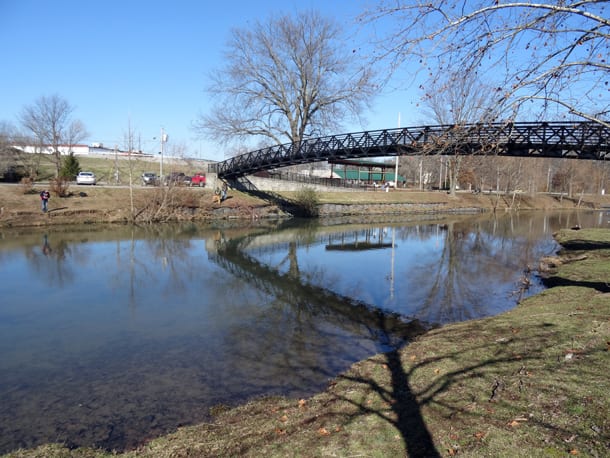 Upon arrival, we were surprised at the number of anglers lining the bank at 11 am on a weekday. There, others standing behind them watching through the gin clear water. These guys had already caught limits (which is seven trout in Tennessee) and were trying to help others do so, too.

What surprised me the most was the size. When we first arrived one guy pulled out a 16-inch rainbow that was more than three pounds. More impressive was there were larger ones in the hole still.

“We don’t bother fishing East Tennessee for the opener,” the man who caught the 16-incher told us. “These trout they stock in the winter are twice as big and in our backyard. Wait; did you say you guys are from California? Do they stock trout there?” 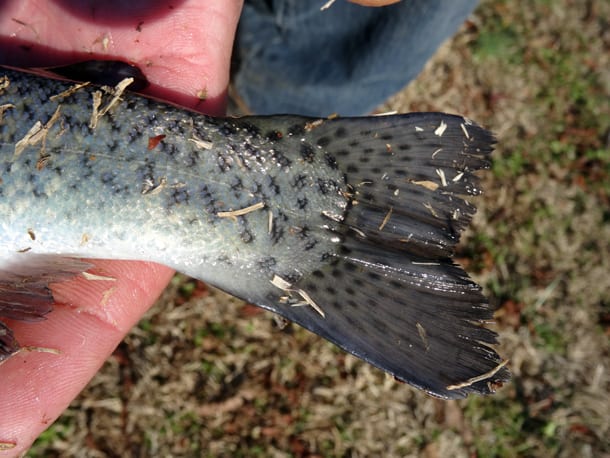 The man was correct. The smallest trout we saw all day was 10 inches. Most were 12-14, which is incredible for a state sponsored stocking program, rare in fact. The TWRA is luring anglers with trout that are huge for planters. In fact, you’d be far fetched to find these anywhere in the Southeast, outside of Cherokee, which is a private hatchery. They don’t even stock them, on average, this big in California, I told him. 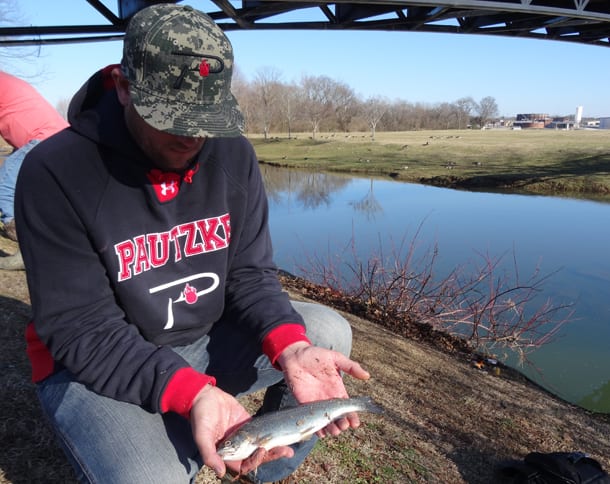 Big Rock Creek can harbor far more than monthly stockings that occur from December through March. It’s a wide, clear, pretty, urban stream that cuts through Lewisburg. Word spreads fast through town when the truck arrives. These trout create a much-needed excitement here in the winter for folks from grade school age to retirees.

There’s so much buzz that we had to wait our turn before making a cast. Since the trout were stocked a day prior, they were still huddled up in tight groups, three large ones, in fact. Unfortunately, anglers had lined the bank on those prime casting spots. It’s a shallow steam. With polarized glasses, you can see every trout. As soon as two guys, who had been here since first light, caught their limits, we moved in. 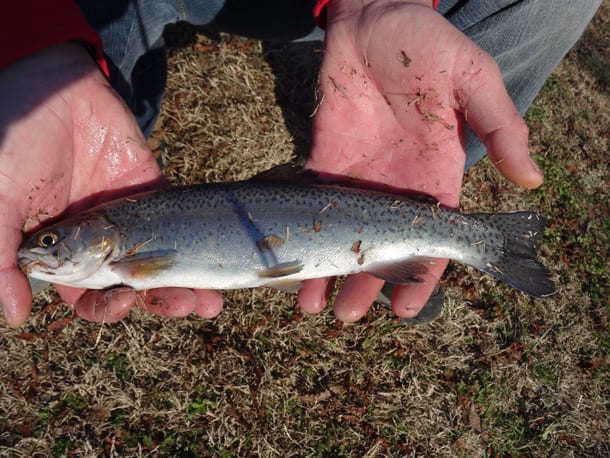 While it took the previous group hours to get limits, we caught trout immediately, partially because we had Balls O Fire salmon eggs and no one else did. We drifted a single Yellow Jacket salmon egg into the hole and got slammed right away, and on the next few casts. The same happened with Gold Label and Silver Label eggs. Others were using dough baits, fake eggs and worms, with lesser success. It made for great video footage!

“Where can I get those?” and old-timer asked me, point at an open jar of eggs on the ground. “Everywhere in East Tennessee, I told him. Or, you can have these jars. We’re done.”

“Done?” he said to me. “You guys just started fishing. We’ve been here all day.”

“Then you better take these,” I said to him, handing a few jars of Pautzke salmon eggs to him. “You’ll be done soon, too.” 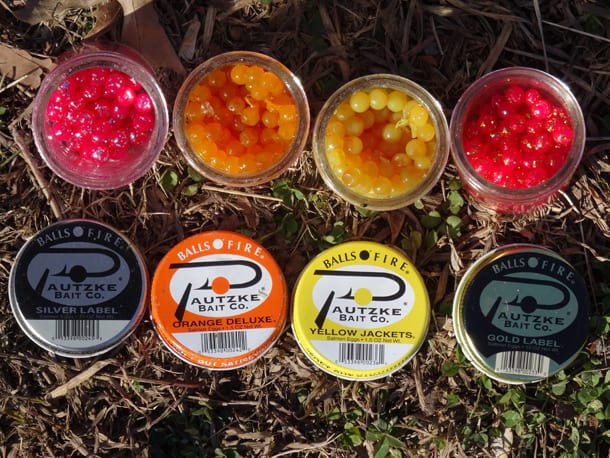 Editor’s Note: Chris Shaffer is the Director of Operations for Pautzke Bait and recommends lunch at Lawlers Barbecue in Lewisburg. Unfortunately, it’s drive through only, but it’s darn good.